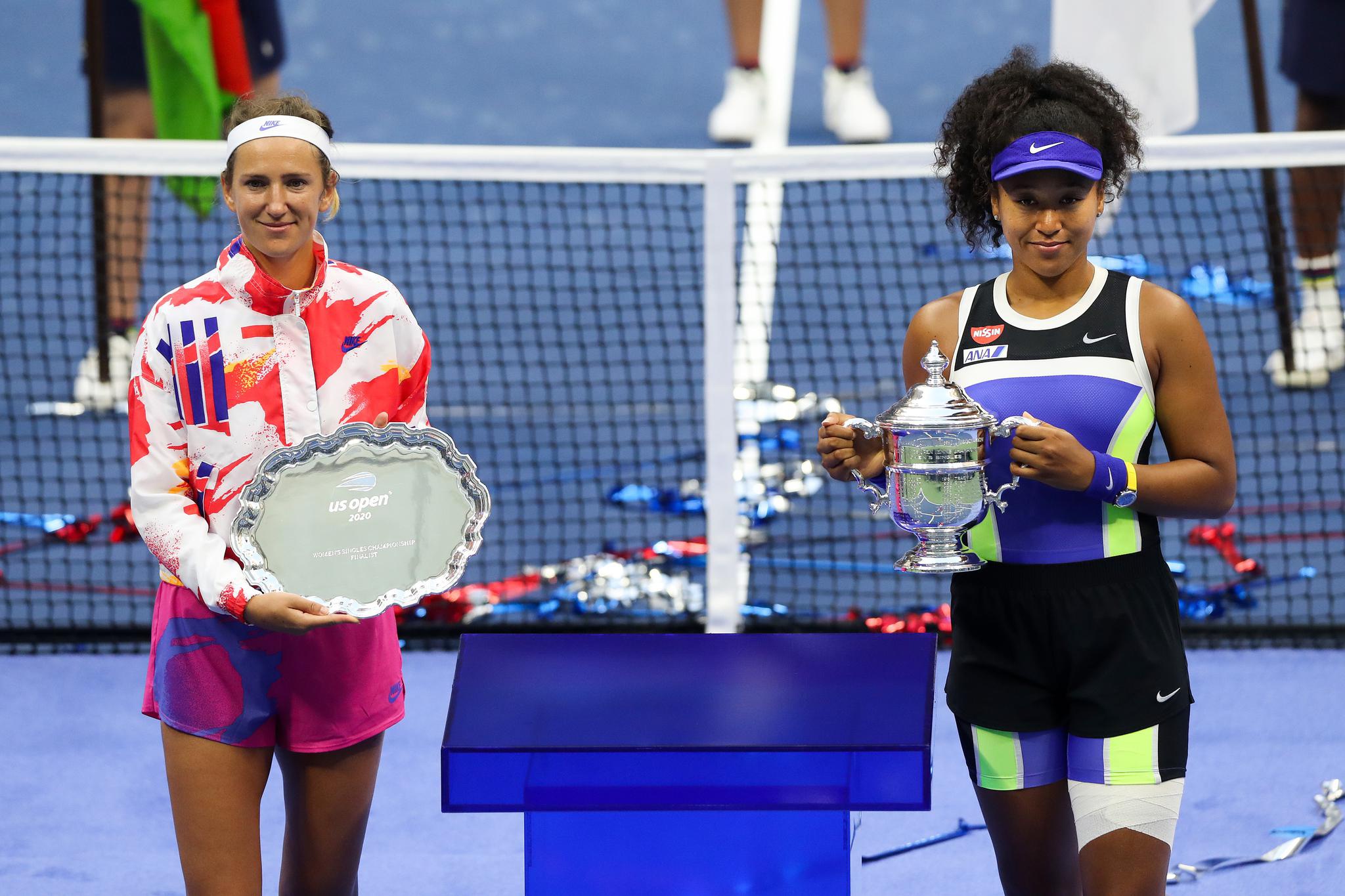 NEW YORK, NY, USA - Naomi Osaka secured her second US Open title in three years with a dramatic win over fellow former World No.1 Victoria Azarenka, outlasting the Belarusian, 1-6, 6-3, 6-3 in the championship match.

"I was thinking about all the times I've watched the great players sort of collapse onto the ground and look up into the sky," she said of her winning moment. "I've always wanted to see what they saw.

"For me, it was really an incredible moment. I'm really glad I did it."

The No.4 seed and 2018 champion overcame an inspired assault from Azarenka in the opening set to win her third career Grand Slam crown after one hour and 53 minutes on Arthur Ashe Stadium.

Both two-time Grand Slam champions heading into Saturday's final, Azarenka and Osaka had played thrice before, with the Japanese youngster winning their two most recent clashes on clay - including a thrilling three-setter at the 2019 French Open. The duo were scheduled to face off just last week at the Western & Southern Open before Osaka withdrew from the final due to a left hamstring injury, handing Azarenka her first title since she gave birth to son Leo in late 2016.

The Belarusian dropped just two sets en route to her first Grand Slam final since the 2013 US Open, rallying from a set down to score a maiden major tournament win over 23-time Grand Slam champion Serena Williams in the semifinals. Osaka, too, battled to a deciding set against surprise semifinalist and Top Seed Open presented by Bluegrass Orthopaedics champion Jennifer Brady.

With both players in rhythm to start the match, Azarenka's ability to absorb and redirect Osaka's pace proved pivotal in the opening set, helping her score two breaks and surge ahead to a 5-1 lead.

Osaka attempted to overpower her fellow former World No.1 at the expense of 13 unforced errors but could only manage five winners. Azarenka, by contrast, was at her scintillating best, making all but one of her first serves and hitting just three unforced errors to take the set in less than 30 minutes.

"I think in the first set I was so nervous, I wasn't moving my feet. I felt like I was not playing, not that I expect myself to play 100%, but it would be nice if I could even play, like, 70%. I just felt like I was too much in my own head."

The unseeded Azarenka amped up her aggression early in the second set, striking eight winners in three games as she nabbed another early break off Osaka. On the brink of an 0-3 deficit, the 2018 champion responded by engineering her first break point of the match, converting it with a deep forehand that yielded a rare error from her Belarusian rival.

"In the second set, of course I was down early, which really didn't help me out. I just thought to myself to be positive, don't lose 6-1, 6-0, hopefully give her a slight run for her money. I just sort of ran with that line of thinking."

Osaka's steadying serve and wider margins paid dividends, helping her put down a love serve game and race out to a 0-40 lead on the Azarenka serve, moving ahead for the first time in the match as the two-time Australian Open champion guided a backhand wide.

A marathon ninth game saw Osaka take a look at set point, only for Azarenka to save it with a brave approach to net. Five total game points went begging for the Belarusian - one thanks to a searing forehand passing shot from Osaka - and the No.4 seed soon had a second set point after a thunderous forehand winner. A second winner off that side sealed a fourth straight game and leveled the match.

In a complete reversal from the first set, Osaka finished the second with 16 winners to just five errors, while Azarenka made 14 winners - half in the first three games - to 10 unforced errors and won less than half of her first serve points.

Azarenka ended the run of games against her at five when she held early in the decider, but threw in her second double fault of the match to fall behind a pair of break points. Osaka edged ahead by ending a long rally with a powerful backhand, and saved a slew of break points on her own serve to close in on a third Grand Slam title.

Battling bravely on the brink of defeat, Azarenka saved four break points that would have seen Osaka serve for the match and turned around a 40-15 scoreline in the following game to get the final set back on serve.

"I think it's definitely been a great three weeks of tennis," Azareanka said after the match. "I haven't had such results in quite a long time, so I'm very excited for it. Today, it's a loss, but it doesn't change for me much. Of course, I would have loved to win today. It is what it is.

"I gave everything that I could today on the court. I felt that I progressed a lot. I've played a lot of great matches. I felt that I've tested myself physically, mentally on very difficult stages. It's been great. I'm very proud of myself. I want to continue to keep going the same way, enjoy myself.

"It was a lot of fun for me to play, to be in the final of the US Open. I'm very grateful for this opportunity."

The 22-year-old reclaimed her lost momentum in emphatic style, outrallying Azarenka to break once more, winning six of seven points to get to championship point. One last long rally ended with Azarenka netting a backhand as Osaka edged over the finish line.

In all, Osaka hit 34 winners to 26 unforced errors - half of which came in the opening set - and converted five of 12 break point opportunities while winning nearly half of points played on return. While Azarenka acquitted herself well in her first major final in seven years, she couldn't keep up with Osaka's aggressive strategy, finishing the match with 30 winners to 22 unforced errors, winning just nine points off her second serve.（By David Kane）