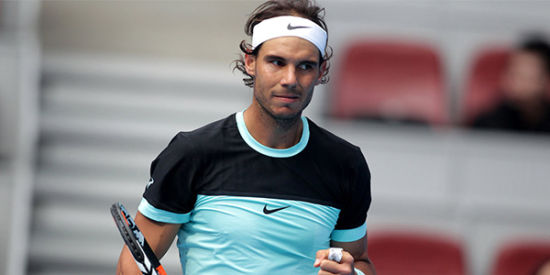 If it’s possible to experience a win within a loss, Rafael Nadal did it as he finished runner-up to Novak Djokovic at the China Open.

“After the match I’m more happy than before the match,” Nadal declared following world No.1 Djokovic’s straight-sets victory in the duo’s 45th professional encounter.

Having experienced a disappointing season according to his own high standards, Nadal is determined now to simply make improvements in his tennis as he builds a stronger base for the 2016 season.

And there were many ways in which Nadal made clear and pleasing progress in Beijing, where the third seed saw off Wu Di, Vasek Pospisil, Jack Sock and Fabio Fognini to progress to his first hard court final since Miami in 2014.

Only one of those China Open matches extended to three sets, young American Jack Sock pushing Nadal in their quarterfinal. “I’m very happy (with) the way that I played this week, especially because I was able to improve single match during the week,” the Spaniard said.

“Especially in (the) quarterfinals against Sock, I changed that dynamic. I played closer to the baseline.”

There was also a psychological win of sorts as Nadal defeated Fognini in the quarterfinals, the Italian having claimed three of their four previous matches this season, including a come-from-behind upset in the third round of the US Open.

And despite the score – which represents Nadal’s most one-sided of the 22 losses he’s registered to Djokovic – there was reason to be positive about tonight’s final performance too.

Having dropped serve in the opening game, there was a near recovery as Nadal held two break points when Djokovic served at 3-2.

With aggression from the baseline, there were many of Nadal’s trademark forehand winners in the longer rallies – along with a strong sense that he wasn’t far from the form that’s made him a 14-time Grand Slam champion and provided long stints at world No.1.

“For moments in that first set, I was very close to that level, thinking that I am playing against a player who is playing unbelievable and with huge confidence,” Nadal surmised of Djokovic, who extended a phenomenal China Open record to six titles, 28 match wins and 27 consecutive sets.

“In terms of game, I was not very far in that first set. Seriously I had a lot of chances.”

Nadal was treated for a right foot injury midway through the third game of the second set and there was a corresponding dip in intensity as he dropped serve in that game and again in the fifth, before Djokovic sealed the 91-minute win with an ace.

“I felt something but hopefully it’s fine,” the Spaniard explained of the injury, adding that he still intends to travel to the Shanghai Rolex Masters tomorrow and complete a scheduled practice session. “For the moment, still the same.”

As the season draws to a close, Nadal is already looking ahead to the next one, knowing that he’s building a foundation to return to his top form in 2016.

“My main goal is try to be 100 per cent ready for the beginning of next a season,” he reiterated. “A week like this one helps a lot.”

Asked whether he can catch Djokovic at world No.1, Nadal would only point to his own progress. “I’m going to fight. I’m going to do it my way,” he stressed. “When I was No.2 and Roger (Federer) was No.1 (it) was not my obsession to improve my game and do my way. For me (it) is the same thing today.”

And even if he’s not winning all his matches – yet – Nadal is certainly winning in attitude. “My motivation is (to) keep going, do it my way,” he stressed. “ I have been doing that already … I know if I am playing well again, then I can fight.”