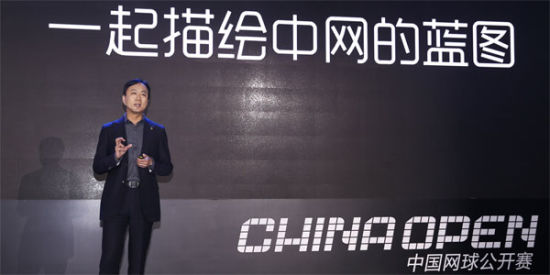 The China Open has achieved compelling progress in the past decade, from its launch in 2004 to the highest viewing rate of all WTA global broadcasts in 2015. With the trend of sports’ industries rapidly increasing use of the internet, the China Open is also outlining its future vision. On January 14th, the Business Resources Promotion for the 2016 China Open was held in the Bird’s Nest Culture Center in Beijing.

Wisdom, enjoyment, growth and cooperation as the natural trend of the China Open for future development

In the morning, the “Natural Trends” promotion, made elaborate explanations regarding the arrangements and development over the next few years; preaching the four themes of wisdom, enjoyment, growth and cooperation. On site, it was announced that famous singer Wang Zhengliang and the China Open hosting team would endorse the China Open teenage tennis and China Open amateur tennis leagues, respectively. The founding of the China Open sponsors’ club and service alliance of Asian tennis events were also announced.

After a decade of expansion, the China Open has grown from a simple tournament into a brand new sport-themed, tennis- and lifestyle-centered entertainment platform, gradually evolving a differentiated consumption format combining tourism, relaxation and experience. Moving forward, the China Open proposed four paths; wisdom, enjoyment, growth and cooperation. These respectively imply the introduction of cutting edge technologies to build a smarter event; the creation of a friendlier environment to entertain every demographic; the integration of tennis into the growth of teenagers through the opening of paths from beginner to professional ; and joining hands with sponsors for win-win development.

During the promotion, the China Open presented all its business marketing resources including some fully-developed traditional projects like China Open ball kids, tennis on campus and CRT, and more open-ended content aimed at the improvement of tournament quality and experience, facilitating brand enterprises identification of connecting points for their products and marketing characteristics to the resources of the China Open; a new pattern of customizing marketing。

The China Open has received unanimous recognition from international organizations, players, media and many famous global companies as the model for Chinese local brand events, as well as developing stable business partner groups as sponsors’ seats were fully subscribed for the first time in 2015. Accordingly, a common platform for communication between the magnates from various industries has been founded. During the promotion, the China Open and sponsors including BBAC, China Life, Kunlun Mountains Mineral Water, China UnionPay, Tianyoude Qingke Liquor, CCTV Sports & Entertainment, and iqiyi jointly announced the establishment of the China Open sponsors’ club.  The sponsors’ club, will serve as a powerful marketing platform for China Open sponsors so that they can complement each other, share resources, communicate and cooperate in all dimensions in the future.

The past several years have definitely been the golden age for the development of Asian tennis; especially Chinese tennis. With the rapid growth of Chinese tennis and the China Open, Chinese tennis players have made huge inroads on the international court, with an Olympic doubles gold medal, two singles’ titles, four women’s doubles titles, and one mixed doubles title in Grand Slams, as well as one WTA Championship. Further, 9 international tennis tours including the China Open, will be held in mainland China in 2016. Based on the common positive anticipation of the growth potential of the Asian tennis market, the China Open, together with Octagon and APG, announced that the three will further deepen their strategic cooperation and jointly set up the service alliance of Asian tennis events.

Currently, Octagon, APG and the China Open own and manage six tennis tournaments in mainland China；the China Open, Wuhan Open, WTA Elite Trophy - Zhuhai, Jiangxi Women’s Tennis Open, Shenzhen Open and Tianjin Open.  In the Asia Region, they also have tours in Taipei, South Korea and Japan. The establishment of the service alliance of Asian tennis events integrates the superior resources of the China Open, Octagon and APG so that they can complement each other’s advantages in tournament service, and achieve the breakthrough from the quantitative to qualitative change. Charles Hsiung, WTA committee member and joint China Open tournament director, said, “We are confident in the Chinese tennis market. Octagon and APG have always closely cooperated with the China Open. With the establishment of the service alliance of Asian tennis events, we will join hands in expanding the Chinese tennis market and building a broader marketing platform to provide better service for all the tournaments we own and operate, to create more business opportunities for our sponsors and to achieve future win-win developments.”

It can be seen that these three event management organizations as business partners will obtain more tennis events marketing information and resources in the future, and the voice of the Chinese tennis industry in international tennis will become more influential; this will directly propel the further growth of the Chinese tennis industry and market.