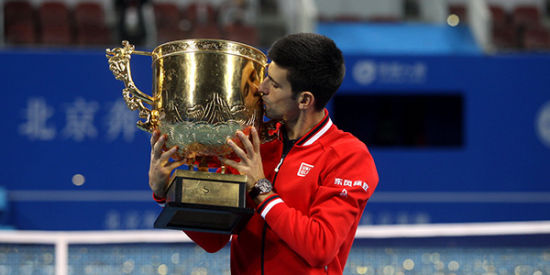 Novak Djokovic is truly at the peak of his powers.

The world No.1 administered a comprehensive beat-down of eternal rival Rafael Nadal, winning their 45th battle by a scoreline of 6-2 6-2 to claim a stunning sixth China Open title.

He is yet to lose a match in Beijing.

His record now stands at a jaw-dropping 29-0, but perhaps even more impressively, he has won 27 consecutive sets.

It is dominance of the highest order, and, by score-line at least, it was his most one-sided win over Nadal in their decade-long competitive history.

But on almost all the big points and at the most important junctures of the match, Djokovic was superior.

“I managed to stay calm and still stick with the game plan to be aggressive and to make him move. It worked very well,” said Djokovic, who finished the match with 23 winners to Nadal's seven.

“I think I maintained that level of aggressivity and strength and power in my shots, and eventually I knew that he's going to make mistakes and he's going to give me shorter balls so I can dominate the rallies, which happened.

“I think the serve helped me a lot tonight, over 80 per cent of first serves in, seven aces, finishing off with an ace. That's an element in my game that has worked very well throughout the entire week that has helped me to win many free points.”

Djokovic signalled his intentions from the very opening point, unleashing a string of potent groundtstrokes and yanking Nadal from side to side along the baseline.

The first service break was his and he was quickly ahead 3-1.

In the fourth game, Nadal struck a forehand winner with the venom of his very best – despite losing the game it appeared to energise him. He held comfortably in the next game and reached 15-40 in the sixth.

Yet there he faltered, mis-timing three shots and helping Djokovic escape for a 4-2 lead.

The seventh game was a highlight, with Djokovic recovering from 40-0 down with some brilliant play to reel off three consecutive points. At deuce, the pair played out a magnificent rally that had the crowd enthralled, with Nadal playing an audacious tweener lob that Djokovic smashed for an overhead winner. He promptly broke again.

Leading 5-2, the world No.1 scorched an off-forehand winner to pocket the opening set.

Things went from bad to worse for Nadal in the third game of the second set when he hurt his right foot, requiring a mid-game medical timeout to receive physio treatment.

Yet one feels the result would have been largely the same regardless of the injury.

Djokovic showed no mercy, breaking shortly after play resumed and later toying with Nadal, drop-shotting the Spaniard and then lofting a volleyed winner over his head and out of reach.

The only real struggle he faced came in the eighth game when serving for the match. The Serb saw two championship points come and go, the second when he completely mis-timed an attempted drop shot.

But when a third arrived, he made no mistake – an ace out wide capped a masterful performance.

Djokovic has now won seven of his past eight meetings with Nadal, a run that began right here in Beijing with his victory in the China Open final of 2013.

Another year, but the same result. Djokovic reigns at the China Open once again.